Kerala SSLC SAY Examination 2014 will be held from 12th May 2014 to 17th May 2014 on selected centers. Save A Year (SAY) Examination will help students those are not qualified in SSLC 2014 to continue their studies without loosing a year in their career. The Kerala SSLC SAY 2014 Results will be announced on the last week of May 2014.

Students those who are not qualified for higher studies in Kerala SSLC 2014 can apply for Kerala SSLC SAY Examination 2014. Students must submit the application in the schools where the appeared for SSLC 2014 Exam.

SAY (Save A Year) Examination will be held for students those are not qualified in SSLC, THSLC, AHSLC Examinations.

Applicaitons for SSLC 2014 Revaluation, Scrutiny, copy of answer sheet are start receiving on 24th April 2014  and end on 28th April 2014. Take a print out of the online application form attest a photograph and give it to the headmasters of corresponding schools where students appeared for SSLC 2014. 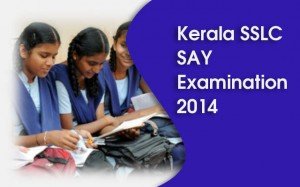 The SSLC 2014 Revaluation Results, Scrutiny Results, Copy of answer sheets are made available before 31st May 2014.

SSLC 2014 Certificates would reach the respective district education officers by May 15, 2014.

The changes in grade after revaluation are published on the official website of Kerala Pareekshabhavan.