Kerala Entrance Results 2014 is declared by the Commissioner for Entrance Examiantions Kerala. KEAM Results 2014 (Kerala Engineering and Medical Entrance) declared on 15th May 2014. KEAM Results are available on the official website of CEE Kerala and Kerala NIC Wesbsite.

Candidates who appeared form Kerala Entrance 2014 can check KEAM Results 2014 with their hall ticket number on the websites cee-kerala.org, cee.kerala.gov.in and keralaresults.nic.in

According to CEE Kerala, the rank lists of medical entrance exam and the score of engineering entrance exam will be declared at 4 pm by Kerala Education Minister PK Abdu Rabb  in a press conference scheduled at Thiruvananthapuram.
Engineering rank list will be announced next month after normalization process. Kerala Engineering will be prepared by giving equal weightage to entrance score and normalized board exam marks. The results will be available online via www.cee.kerala.gov.in, http://keralaresults.nic.in, and http://results.kerala.nic.in 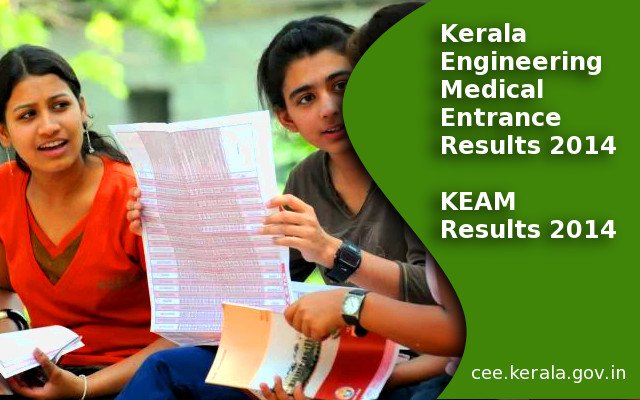 KEAM 2014 cutoff marks will be announced for all the category General , OBC , SC, ST . After the check the Keam score students will be eligible for next round i.e. KEam 2014 Counselling for Engineering , Medical , Architecture .